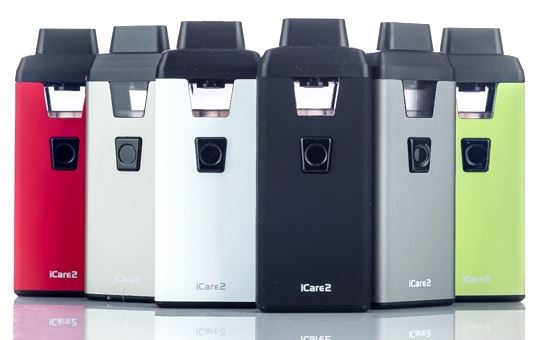 The second edition to the very popular iCare pod system.
If you liked the original iCare your going to love this new version.

Eleaf presents their all new ultra portable system the iCare 2 that boasts to be the smallest but no less capable edition of the iCare family in which quickly became one of the most popular ultra portable systems available, and features a new rubber paint finish giving users a softer and smoother feel, a removable 2ml tank and a beefier 650 mAh rechargeable battery with a 15W maximum output perfectly paired with the 1.3 ohm IC Coil. Despite being smaller than the iCare, the iCare 2 squeezes in a top filled 2 milliliter top filled reservoir. Utilizing a press to fire activated design, output of the iCare 2 maintains the maximum output of 15W, providing astounding performance for the size. The fill port section is accessed by removing the mouth piece. The IC coil can be installed by popping the bottom cover of the cartridge and threaded towards the top. The new IC 1.3ohm head makes a debut its to the IC Coil Family, still featuring a highly effective size with a resistance rating of 1.3 ohms and a wattage range between 5 and 15W. Additionally, users can also charge their device via USB cable featuring four LED color for battery level; Green being 100% to 60%, Orange being 59% to 30%, blue being 29% to 10%, and red being less than 9%. Offering the best of both worlds in regards to power and portability, the iCare 2 asserts itself as the definitive all in one ultra portable system available today.